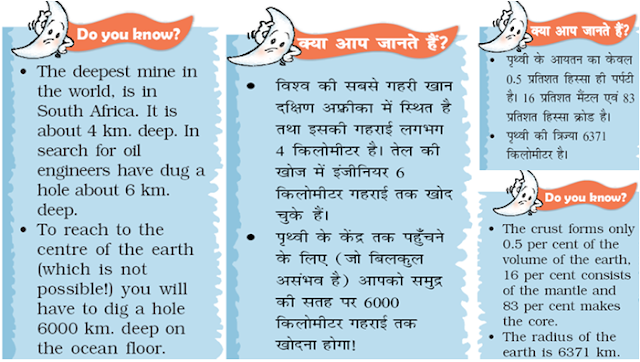 Rocks and Minerals
1.       The solid part of the earth’s crust is called Rock
2.       Rocks can be of different colour, size and texture (बनावट).
3.       There are three major types of rocks: igneous rocks, sedimentary rocks and metamorphic rocks


Igneous rocks
1.       Latin word Ignis meaning ‘fire’
2.       When the lava comes out from the interior of the earth on its surface, here it is called magma
3.       When the molten (पिघला हुआ) magma cools, it becomes solid & this solid form of rocks is called igneous rocks.
4.       They are also called primary rocks.
5.       There are two types of igneous rocks: intrusive rocks and extrusive rocks.
Intrusive rocks
1.       Sometimes the molten magma cools down deep inside the earth’s crust.
2.       Solid rocks so formed are called intrusive igneous rocks.
3.       It cools down slowly so it forms large grains e.g. Granite


Extrusive rocks
1.       When this molten (पिघला हुआ) lava comes on the earth’s surface, it rapidly cools down and becomes solid.
2.       Rocks formed in such a way on the crust are called extrusive igneous rocks.
3.       They have a very fine grained structure e.g. basalt.
4.       The Deccan plateau is made up of basalt rocks.

Sedimentary rocks
1.       Latin word sedimentum meaning settle down (नीचे बैठना)
2.       Sedimentary rocks are formed from particles of sand (रेत), pebbles (कंकड़), and other pieces of material.
3.       Together, all these particles are called sediment.
4.       Gradually, the sediment accumulates (जमा होना) in layers and over a long period of time hardens (सख़्त होना) into rock under tremendous (बहुत अधिक) pressure.
5.       These types of rocks are called sedimentary rocks.
6.       Generally, sedimentary rock is fairly (पूरी तरह से) soft and may break apart easily e.g. sandstone.
7.       These types of rocks are formed on the Earth's surface as well as underwater. 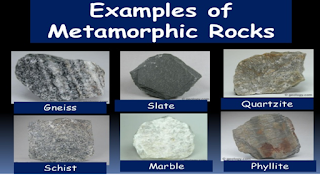 Rock cycle
1.       One type of rock changes to another type under certain conditions & this process of transformation is called rock cycle.
2.       When the molten magma cools; it solidifies to become igneous rock.
3.       These igneous rocks are broken down into small particles that are transported and deposited to form sedimentary rocks.
4.       When the igneous and sedimentary rocks are subjected to heat and pressure they change into metamorphic rocks.
5.       The metamorphic rocks which are still under great heat and pressure melt (पिघलना) down to form molten magma
6.       This molten magma again can cool down and solidify into igneous rocks Fossils - The remains (अवशेष) of the dead plants and animals trapped in the layers of rocks are called fossils.