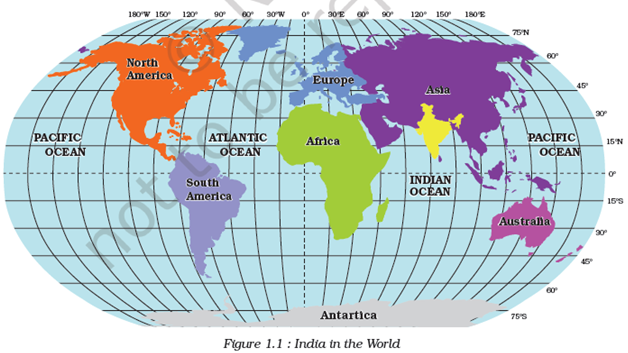 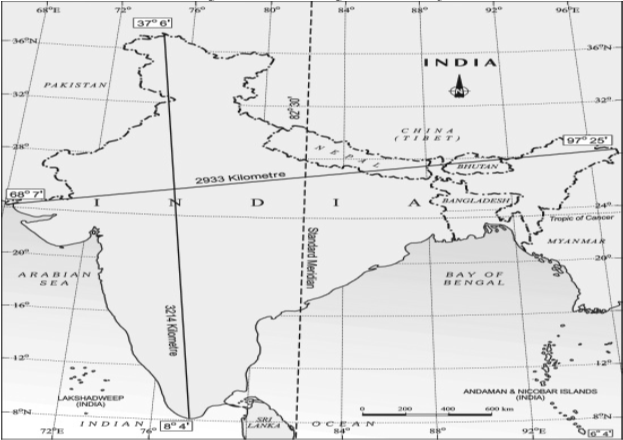 INDIA AND THE WORLD
1.       The Indian landmass has a central location between the East and the West Asia.
2.       India is a southward extension of the Asian Continent.
3.       The Trans Indian Ocean routes which connect the countries of Europe in the West and the countries of East Asia provide a strategic central location to India.
4.       Note that the Deccan Peninsula spread (फैलना) into the Indian Ocean.
5.       Thus helping India to establish close contact with West Asia, Africa and Europe from the western coast and with Southeast and East Asia from the eastern coast
6.       No other country has a long coastline (समुद्री किनारा) on the Indian Ocean as India has so that the name given of an Ocean after it.
7.       India’s contacts with the World have continued through the ages but her relationships through the land routes are much older than her maritime contacts.
8.       The various passes across the mountains in the north have provided passages to the ancient travellers, while many didn’t know about oceans for a long time.
9.       These routes are very helpful in the exchange of ideas and commodities (वस्तु) since ancient times.
10.   The ideas of the Upanishads and the Ramayana, the stories of Panchtantra, the Indian numerals and the decimal system thus could reach many parts of the world.
11.   The spices (मसाले), muslin (मलमल) and other merchandise (व्यापारिक माल) were taken from India to different countries.
12.   On the other hand, the influence of Greek sculpture (मूर्ति), and the architectural styles of dome (गुंबद) and minarets (मीनार) from West Asia can be seen in different parts of our country. INDIA’S NEIGHBOURS
1.       India has 29 states and 7 Union Territories.
2.       India shares its land boundaries with Pakistan and Afghanistan in the northwest, China (Tibet), Nepal and Bhutan in the north and Myanmar and Bangladesh in the east.
3.       Our southern neighbours across the sea consist of the two island countries, namely Sri Lanka and Maldives.
4.       Sri Lanka is separated (अलग करना) from India by a narrow (तंग) channel of sea formed by the Palk Strait and the Gulf of Mannar while Maldives Islands are situated to the south of the Lakshadweep Islands.
5.       India has had strong geographical and historical links with her neighbours.

1.      Why 82°30'E has been selected as the Standard Meridian of India –
From Gujarat to Arunachal Pradesh there is a time lag of two hours. Hence, time along the Standard Meridian of India (82° 30' E) passing through Mirzapur (in Uttar Pradesh) is taken as the standard time for the whole country. Otherwise different regions of India would have different times which would create problems; so, to have one common standard times for the whole country has been selected and called Indian Standard Time (IST).

2.      Why the difference between the durations of is day and night hardly felt at Kanyakumari but not so in Kashmir –
The day and night are nearly of the same duration at the equator. As Kanyakumari is quite near the equator at 8°4'N the day-night difference is hardly one hour there, and therefore, the duration of day and night is hardly felt at Kanyakumari. On the other hand, as we move away from the equator to the poles the variations in duration of day and night become greater. Kashmir is over 30° away from the equator and so the difference in duration of day and night is more there and we feel that difference.
3.      The number of Union Territories along the western and eastern coasts –
Union Territories along the (a) Western Coast Lakshadweep, Diu and Daman, Dadra and Nagar Haveli and                Mahe (belonging to Pondicherry)
(b) Eastern Coast Puducherry, Andaman and Nicobar Islands.
4.      Area-wise which is the smallest and which is the largest state –
Area-wise (a) Largest State Rajasthan (3,42,239 sq km) (b) Smallest State Goa (3,702 sq km)
5.      The states which do not have an international border or lie on the coast –
States which do not have International Boundary of lie on the coast (a) Haryana, (b)Jharkhand, (c) Madhya Pradesh and (d)Chhattisgarh.
Subscribe My You Tube channel- Competitive World Knowledge


6.   Classify the states into four groups each having common frontiers with
(i) Pakistan, (ii) China, (iii) Myanmar, and (iv) Bangladesh
States having common frontiers with   (a) Pakistan Gujarat, Rajasthan, Punjab and Jammu & Kashmir   (b) China Himachal Pradesh, Uttarakhand, Sikkim, Arunachal Pradesh and Jammu & Kashmir   (c) Myanmar Manipur, Nagaland, Arunachal Pradesh and Mizoram   (d) Bangladesh West Bengal, Assam, Meghalaya, Tripura and Mizoram
Do you Know?
1.     The southernmost point of the Indian Union– ‘Indira Point’ got submerged under the sea water in 2004 during the Tsunami.
2.     Since the opening of the Suez Canal in 1869, India’s distance from Europe has been reduced by 7,000 km.
3.     Before 1947, there were two types of states in India – the provinces and the Princely states. Provinces were ruled directly by British officials who were appointed by the Viceroy. Princely states were ruled by local, hereditary rulers, who acknowledged sovereignity in return for local autonomy.