Chapter 2, Class 7
New Kings and Kingdoms
The Emergence of new dynasties
1.      By the 7th century there were big landlords (जमींदार) or warrior (योद्धा) chiefs in different regions of the subcontinent.
2.      They worked under the kings as their subordinates (अधीन करना) or samantas.
3.      They brought gifts for their kings and also provide military support.
4.      After gaining more power and wealth (धन-दौलत), they declared themselves to be maha-samanta, maha-mandaleshvara.
5.      Sometimes they claimed (दावा करना) their independence from their kings.
6.      E.g. Rashtrakutas were subordinate to the Chalukyas of Karnataka.
7.      Dantidurga (Rashtrakuta chief) performed hiranya-garbha (golden womb) with the help of Brahmanas & said “rebirth” of the Kshatriya, even if he was not one by birth.
8.      Other example was, the Kadamba Mayurasharman and the Gurjara- Pratihara Harichandra were Brahmanas who gave up their traditional professions and took to arms, successfully establishing kingdoms in Karnataka and Rajasthan with the help of military skills. 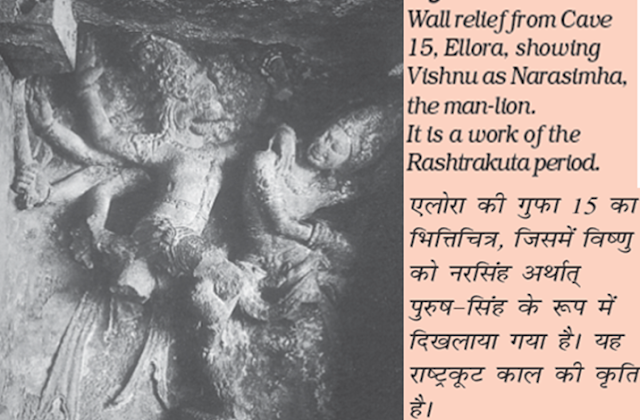 Administrations in the Kingdoms
1.      Many kings adopted high titles like maharaja-adhiraja (great king, overlord [अधिपति] of kings), tribhuvana-chakravartin (lord of the three worlds).
2.      Kings also shared power with their samantas as well as with associations of peasants (किसान), traders (व्यापारी) and Brahmanas.
3.      Tax was also collected in two types
4.      Vetti – It is in the form of forced labour not in cash form
5.      Kadamai – It is taken in the form of land revenue.
6.      Revenue was also collected from traders.
7.      These taxes were used to finance the king’s establishment, as well as for the construction of temples and forts (क़िला).
8.      It was also used in fight wars; in turn they acquired (प्राप्त करना) wealth in the form of plunder (लूट).
Prashastis and Land Grants
1.      Prashastis contain details about the rulers & wanted to depict (दर्शाना) themselves like valiant (शूरवीर), victorious (विजेता) warriors (योद्धा).
2.      These were composed (बनाना) by Brahmanas, who helped in the administration.
3.      Kings often rewarded (पुरस्कार) Brahmanas by grants (अनुदान or देना) of land.
4.      These were recorded on copper plates, which were given to those who received the land

Warfare for Wealth
1.      Many kings tried to control other areas.
2.      One such area was the city of Kanauj in the Ganga valley.
3.      Rulers like the Gurjara-Pratihara, Rashtrakuta and Pala dynasties fought with each other for control over Kanauj.
4.      It included three “parties” so that it is called “tripartite struggle”.
5.      Rulers also tried to show their powers by building large temples.
6.      So, when they attacked one another’s kingdoms (राज्य), they often chose to target temples
7.      Best example is Sultan Mahmud of Ghazni, Afghanistan.
8.      He ruled from 997 to 1030, and extended (विस्तृत करना) control over parts of Central Asia, Iran and the north-western part of the subcontinent.
9.      His targets were wealthy (दौलतमंद) temples, including that of Somnath, Gujarat.
10.  Sultan Mahmud was also interested to know more about the people he conquered (जीतना).
11.  He said to Al-Biruni to write a book & was known as the Kitab ul-Hind.
12.  Other kings like Chahamanas (Chauhans) who ruled over the region around Delhi and Ajmer.
13.  They tried to expand their control on the Chalukyas of Gujarat and the Gahadavalas of western Uttar Pradesh.
14.  The best-known Chahamana ruler was Prithviraja III (1168-1192), who defeated (हराना) an Afghan ruler named Sultan Muhammad Ghori in 1191, but lost to him the very next year, in 1192. 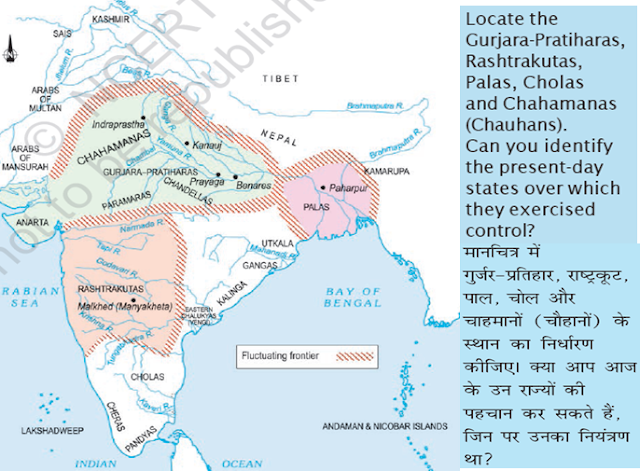 A Closer Look: The Cholas
From Uraiyur to Thanjavur
1.       Muttaraiyar held power in the Kaveri delta & were subordinate (अधीन) to the Pallava kings of Kanchipuram.
2.       Vijayalaya (family of the Cholas from Uraiyur) captured (कबज़ा करना) the delta from the Muttaraiyar in the middle of the 9th century.
3.       He built the town of Thanjavur and a temple for goddess Nishumbhasudini there.
4.       The successors of Vijayalaya conquered (जीतना) neighbouring regions and the kingdom grew in size and power.
5.       The Pandyan and the Pallava territories to the south and north were made part of this kingdom.
6.       Rajaraja I, considered the most powerful Chola ruler, became king in 985 and expanded control over most of these areas.
7.       Rajaraja’s son Rajendra I continued his policies and even raided the Ganga valley, Sri Lanka and countries of Southeast Asia, developing a navy for these expeditions (आक्रमण). 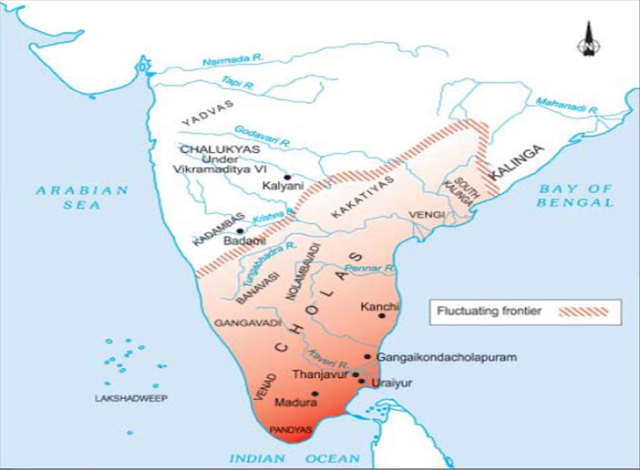 Splendid Temples and Bronze Sculpture
1.       The big temples of Thanjavur and Gangaikondacholapuram, built by Rajaraja and Rajendra.
2.       The bronze images were the most attractive in the temple.
3.       Chola bronze images are considered amongst the finest in the world.
4.       While most images were of deities (देवता or देवी), sometimes images were made of devotees (भक्त) as well. 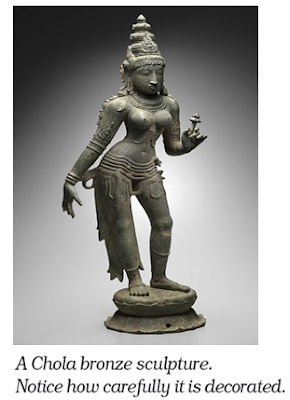 Agriculture and Irrigation
1.       Small river from Kaveri depositing fertile (उपजाऊ) soil on their banks (किनारा)
2.       Due to this, cultivation (खेती) of the rice was done in these areas.
3.       Forests had to be cleared in some regions; land had to be leveled (बराबर करना) in other areas.
4.       In the delta region embankments (बांध) had to be built to prevent (रोकना) flooding (बाढ़) and canals had to be constructed to carry water to the fields.
5.       In many areas two crops were grown in a year.
6.       In many cases it was necessary to water crops artificially.
7.       A variety of methods were used for irrigation.
8.       In some areas wells were dug (खोजना).
9.       In other places huge tanks were constructed to collect rainwater.
The Administration of the Empire
1.       Settlements of peasants, known as ur.
2.       Groups of such villages formed larger units called nadu.
3.       The village council and the nadu performed task like justice and collecting taxes.
4.       Nadu was supervised (संचालन करना) by the Vellala caste (Rich peasants) which supervised under the central Chola government.
5.       The Chola kings gave some rich landowners titles like muvendavelan (a peasant serving three kings), araiyar (chief), etc. as markers of respect.
6.       Associations of traders known as nagarams also performed administrative functions in towns.
Requirements of Members of sabha
1.       All those who wish to become members of the sabha should be owners of land from which land revenue is collected.
2.       They should have their own homes.
3.       They should be between 35 and 70 years of age.
4.       They should have knowledge of the Vedas.
5.       They should be the knowledge in administrative matters and honest.
6.       If anyone has been a member of any committee in the last three years, he cannot become a member of another committee.
7.       Anyone who has not submitted his accounts, and those of his relatives, cannot contest the elections.
Types of Land
1.       Vellanvagai land of non-Brahmana peasant proprietors (स्वामी)
2.       Brahmadeya land gifted to Brahmanas
3.       Shalabhoga land for the maintenance of a school
4.       Devadana, tirunamattukkani land gifted to temples
5.       Pallichchhandam land donated to Jaina institutions
China under the Tang dynasty
1.       In China, an empire was established under the Tang dynasty, which remained in power for about 300 years (from the 7th to the 10th centuries) & its capital, Xi’an
2.      The Tang empire was administered by a bureaucracy recruited (भरती करना) through an examination, till 1911.