Chapter – 1, Class - 10
Power sharing
Belgium and Sri Lanka
1.       Belgium is a small country in Europe, smaller in area than the state of Haryana.
2.       Its borders touch with France, Netherlands, Germany and Luxembourg.
3.       It has a population of a little over one crore, about half the population of Haryana.
4.       The ETHNIC (जातीय) composition (बनावट) of this small country is very complex.
5.       Of the country’s total population, 59 % lives in the Flemish region and speaks Dutch language.
6.       Another 40 % people live in the Wallonia region and speak French.
7.       Remaining 1 % of the Belgians speak German.
8.       In the capital city Brussels, 80 % people speak French while 20 % are Dutch speaking.
9.       The minority (अल्पसंख्यक) French-speaking community was rich and powerful.
10.   Dutch-speaking community was angry for this who got the benefit of economic development and education much later.
11.   This led to tensions between the Dutch-speaking and French-speaking communities during the 1950s and 1960s.
12.   This tension was seen more in Brussels.
13.   Dutch-speaking people constituted a majority in the country, but were poor & weak.
14.   Let us compare this to the situation in another country.
15.   Sri Lanka is an island nation, just a few kilometers off the southern coast of Tamil Nadu.
16.   It has about 2 crore people, about the same as in Haryana.
17.   The major social groups are the Sinhala-speakers (74 %) and the Tamil-speakers (18 %).
18.   Among Tamils there are two subgroups.
19.   Tamil natives (मूल निवासी) of the country are called ‘Sri Lankan Tamils’ (13 %).
20.   The rest, whose forefathers (पूर्वज) came from India as plantation workers during colonial period, are called ‘Indian Tamils’.
21.   As shown in map, Sri Lankan Tamils are populated in the north and east of the country.
22.   Most of the Sinhala speaking people are Buddhists, while most of the Tamils are Hindus or Muslims.
23.   Just imagine what could happen in situations like this.
24.   In Belgium, the Dutch community could take advantage of its numeric majority (बहुसंख्यक) and force its will on the French and German-speaking population.
25.   This would increase conflict (झगड़ा) further.
26.   This could lead to partition (बँटवारा) of the country; both the sides would claim (दावा करना) control over Brussels.
27.   In Sri Lanka, the Sinhala community enjoyed an even bigger majority and could impose (थोपना) its will (इच्छा) on the entire country. 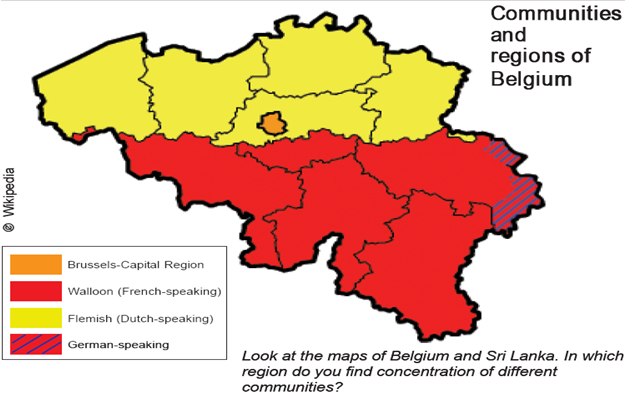 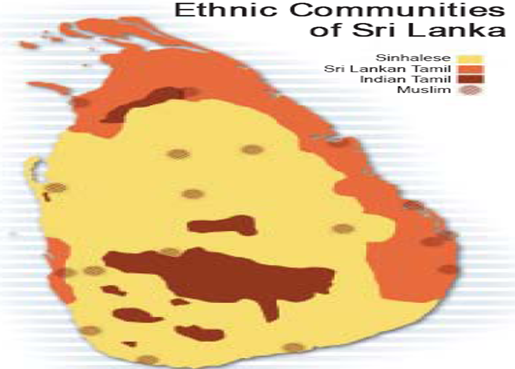 
Majoritarianism in Sri Lanka
1.       Sri Lanka got independence country in 1948.
2.       The leaders of the Sinhala community tried to secure dominance (प्रधानता) over government by power of their majority.
3.       As a result, the democratically elected government with the help of majority to establish Sinhala supremacy (प्रभुता)
4.       In 1956, an Act was passed to recognise (मान्यता देना) Sinhala as the only official language, thus ignoring Tamil.
5.       The governments also started policies to give preference to Sinhala applicants for university positions and government jobs.
6.       A new constitution insured (गारंटी देना) that the state shall protect and promote (बढ़ावा देना) Buddhism.
7.       All these government measures gradually (धीरे-धीरे) increased the differences among the Sri Lankan Tamils.
8.       They felt that none of the major political parties of Sinhala leaders was sensitive (संवेदनशील) to their language and culture.
9.       They felt that the constitution and government policies denied (इनकार करना) them equal political rights, discriminated (अंतर करना) against them in getting jobs and other opportunities.
10.   As a result, the relations between the Sinhala and Tamil communities strained (तनावपूर्ण) over time.
11.   The Sri Lankan Tamils launched parties and struggles for the recognition (पहचान) of Tamil as an official language, for regional autonomy and equality of opportunity in education and jobs.
12.   But their demand for more autonomy to provinces (प्रांत) populated by the Tamils was repeatedly denied (इनकार करना).
13.   By 1980s several political organisations were formed demanding an independent Tamil Eelam (state) in northern and eastern parts of Sri Lanka.
14.   The distrust (अविश्वास) between the two communities turned into widespread conflict (झगड़ा).
15.   It soon turned into a CIVIL WAR.
16.   As a result thousands of people of both the communities have been killed.
17.   Many families were forced to leave the country as refugees and many more lost their livelihoods (रोजगार).
18.   This civil war has ...
Subscribe My You Tube channel- UPSC Exam
To get the videos FOR UPSC, State PCS, SSC CGL, Bank PO, RBI,...
Class 6th to 12th Politics, History, Geography, Economy…
Class 7th to 10th Science……Spoken English Videos
You can buy PDF Files ...message me on 9780184884 (WhatsApp number) @ very less cost
You can buy PDF Files ...message me on 9780184884 (WhatsApp number) @ very less cost
You can buy PDF Files ...message me on 9780184884 (WhatsApp number) @ very less cost
class10