Chapter – 1
Development
WHAT DEVELOPMENT PROMISES — DIFFERENT PEOPLE, DIFFERENT GOALS
1.       Different persons can have different developmental goals.
2.       What may be development for one may not be development for the other or it may even be destructive (विनाशकारी) for the other.
3.       Development is a real goal by enhancing (बढ़ाना) total income & standard of living of a person.
4.       E.g. A girl from a rich urban family gets as much freedom as her brother and is able to decide what she wants to do in life & able to pursue her studies abroad.
INCOME AND OTHER GOALS
1.       People prefer to earn more income for fulfilling their daily requirement of life.
2.       Company provides material things like money.
3.       But people also want non material things like freedom, security & respect or dignity (गौरव) as their goals.
4.       Some companies provide less salary, facilities for your family, working atmosphere, or opportunity to learn but offer regular salary which increases sense of security.
5.       Whereas some companies provide high salary, no time for your family, no job securities & reduces sense of security.
NATIONAL DEVELOPMENT
1.       It refers to ability of a nation to improve standard of living of its citizens.
2.       Standard of living of citizens depend upon per capita income, gross domestic product (GDP), literacy (पढ़ने लिखने की योग्यता) rate and health facilities etc.
3.       GDP – Money value of all the goods and services are produced within a country in a year
4.       All these factors are very important for the national development.
HOW TO COMPARE DIFFERENT COUNTRIES OR STATES?
1.       We can compare different countries or state on the basis of per capital income
2.       Per capita income is calculated by dividing total income of a country to total population of that country.
3.       Per capita income of a country shows the standard of living of the citizens.
4.       A country with higher per capital income is more developed than others with less per capita income.
5.       According to World Bank, Countries with PCI of US$ 12,056 per annum and above in 2017, are called rich countries and those with PCI of US$ 955 or less are called low-income countries.
6.       India comes in the category of low middle-income countries because its per capita income in 2017 was just US$ 1820 per annum.
INCOME AND OTHER CRITERIA
1.       For achieving development goals, people want better income, health facilities, education and also non-material things like freedom, security & respect of others.
2.       Let us try to find some important facts regarding income and health.
3.       Table given below, the per capita income of Haryana, Kerala and Bihar. 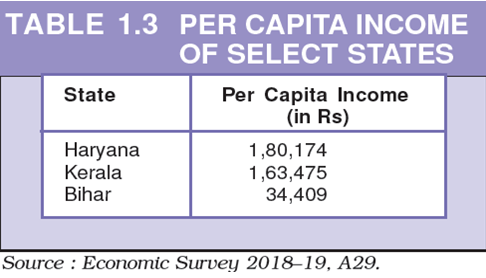 Infant (शिशु) Mortality Rate (मृत्यु-दर)
1.       It indicates the number of children that die before the age of one year as a proportion of 1000 live children born in that particular year
2.       It indicates the development of health facilities in a country.
Literacy Rate (साक्षरता दर)
1.       It is the number of people above 7 years of age who are able to read and write with understanding.
2.       Higher the literacy rate, more developed a state will be.
Net Attendance Ratio
It is the total number of children of age group 14- and 15-years attending school as a percentage of total number of children in the same age group.
PUBLIC FACILITIES
1.       Facilities which are provided by the Government considered as public facility like hospitals, education, community halls, transport, electricity etc.
2.       We need public facilities because we are not able to purchase all things by money.
3.       E.g. we cannot able to buy a population free environment with the help of money.
HUMAN DEVELOPMENT REPORT
Human Development Report published by UNDP (United nations development programme) compares countries based on the educational levels of the people, their health status and per capita income
Some data regarding India
Life expectancy (उम्मीद) at birth –
HDI Rank in the World – 129 out of 189 (in 2019) & HDI value – 0.647
Gender development index – 0.829 & ranks – 122 out of 162 countries
SUSTAINABILITY OF DEVELOPMENT
1.       Sustainable development is helpful to fulfil the needs of human beings without harming (नुक़सान पहुंचाना) the ability of the future generations.
2.       India’s score has 60 in 2019, Kerala (score – 70) achieved first rank, Himachal P (69) with second rank, Andhara Pradesh, Telangana, Tamil nadu (67) with third rank, Bihar (50) worst performer.
Ways to Protect
1.       Avoid environmental degradation by growing more and more trees.
2.       We should protect flora (वनस्पति) and fauna (जीव-जन्तु).
3.       Proper use of Natural Resources with the help of Environmentalist.
4.       Some renewable resources like groundwater will take long time for replenished (फिर से भरना). So, we should use that resources in finite quantity.
5.       Maintaining fertility (उपजाऊपन) of the culturable land.